A radio plays
Benny Goodman and Chick Webb
In another room

A haunting refrain
A particular madness
I don’t hear voices

If you have the good fortune to stay alive 48 years, you can’t help but learn a few things. I hope this saves you some of the trouble. If swelling, discoloration, or bleeding occurs, put down the list and notify your physician.

#31 Pretend that you belong somewhere, and people will usually assume you do.

#32 Never. Call. The. Cops. There is no bad situation that can’t be made worse by the addition of the authorities.

#33 Stay limber. You will be glad you did when the cops show up and/or people finally realize that you do not belong.

#34 For fuck’s sake, keep your hands off of your fucking face! Stroking your chin in a pantomime of deep consideration is, in reality, anything but. This is how you get sick all the time.

#35 I was a smart kid but not very wise. Now, I’m wise as hell but still do things that aren’t very smart. Endeavor to be both and see where you end up. 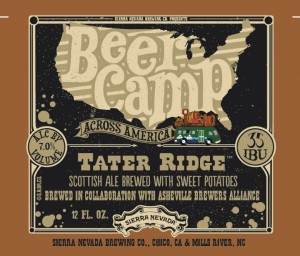 This summer’s Sierra Nevada Beer Camp box carries a telling tagline. North Carolina is about as far Across America as one could get from Chico, California, but this casting of a wider net has brought in a consistently interesting catch.

Tater Ridge throws a nose of earthy malts and hints of a Scotch Ale alcohol burn to come. Upon first sip, however, the Tater reveals a velvet-smooth malt foundation, buoyed by use of the starchy tubers in the mash. The alcohol burn never asserts itself, having been blanketed by Ashville’s own Riverbend Six-Row, as well as, Golden Promise, Caramel, and Chocolate malts.

Sierra Nevada is well known for its expertise with the West Coast hop trinity, but here, the brewery has also stretched out, employing two types more commonly affiliated with lighter, more traditionally German types of beer; Motueka, a New Zealand variant of the Czech perennial Saaz, and Horizon, an American cross between Brewers Gold and old school German hops. Both of these bitter hops help to tame the serious malt foundation the collaboration has poured on this property.

It’s only when the two breweries employ their secret weapon, does Tater Ridge finally break the gravitational pull of all that starch. Mosaic is an American hop described as “Citra on steroids,” with all the citrus and pine of its Simcoe parentage. With some high citrus notes introduced to cut through all the heavy complexity, Tater Ridge finally blossoms into a well-balanced brew exceeding even the substantial sum of its parts. 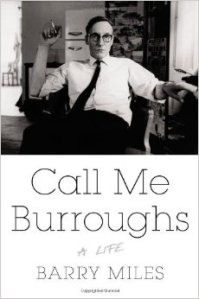 Counterculture chronicler Barry Miles’ latest biography, Call Me Burroughs: A Life, is a very thorough account of one of the most interesting writers of the 20th century, not that his writing was the most interesting, at least at first. Burroughs kind of falls into the trade, much of his first three books reworked from recollections in letters to reluctant paramour Allen Ginsberg.

His best-known book, Naked Lunch, began as routines made up in an attempt to seduce Ginsberg as well as shock and entertain his constant cadre of artists, junkies, and fellow ne’er-do-wells surrounding him in Moroccan exile.

Anyone with the most cursory interest in the Beats (an appellation he never would acknowledge) knows the defining act of Burroughs’ early life is the accidental murder of his wife Joan. It is the struggle to understand what led him to such a horrible moment that finally gives him the courage/derangement to abandon straightforward narrative and jump into the literary deep end.

Although Miles does a good job of placing Burroughs’ cut-up experiments in context of the mid-century avant-garde art movements, he counts on readers having navigated those texts and doesn’t provide examples of what he struggles to describe. In depth.

In many ways, Burroughs was ahead of his time and really presaged the post-digital revolutionary world in which we now find ourselves buried neck deep. These days, someone would (or more probably, already has) make an app to chew through supplied texts, spitting out surprising combinations, juxtapositions, and a whole lot of bullshit at the push of a virtual button. Burroughs did it first. With scissors. Like a boss.

Junkies are not interesting in and of themselves. Of course, it was not surprising to learn the only thing that meant more to Burroughs than writing (and chasing Arab boys) was heroin but it did become tiresome and somewhat sad to think of all the work that could have been accomplished had he not spent so much time getting hooked, getting clean, getting hooked, getting clean … etc. Rather than going the rock star route and making the life seem glamorous, Miles’ extensive examination makes a great cautionary tale.

When all 600 pages were said and done, what really came through, and was surprising, was what a gentle, big heart Burroughs had underneath the ultra-cool exterior, barring his rampant misogyny. He often tried to do the right thing, other times did not and would later regret it, but in the end, the junk always won out.

To quote Neil Young from an equally dark place, “He tried to do his best, but could not.” 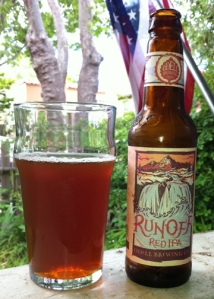 Even on paper, this beer is less hoppy than many West Coast IPAs. At 50 IBUs, it sits right in the bitter center for the style (40-60). Although the label boasts a dry hopped stage, the malt profile completely dominates, hops providing only a residual bitterness on the front of the tongue.

Although Odell may have missed the mark stylistically—Runoff Red is an excellent amber—its drinkability and sumptuous body leads one toward forgiveness.

Taking public transportation to and from the City every day affords one a unique perspective on fellow travelers. Buses are, by nature, pretty big, but maybe because they’re so damn ubiquitous—like the proverbial elephant in the room—no one sees them. The casual glance out the window and down rewards even the mildly curious (or bored) rider with a veritable cross-section of humanity—a good portion of whom at any time will be engaged in every type of ill-advised behavior for a person operating a motor vehicle.

In the year and change since I started leaving the truck back in the holler, I’ve witnessed “drivers” texting, shaving, cutting their hair, doing their makeup, eating cereal, reading the paper, reading a book, and exchanging pleasantries with their passenger(s). If you know what I mean.

This morning, however, took the cake. While rolling through the tony enclave of Ross, a driver pulled alongside the bus and started smoking dope off a piece of tinfoil with a blowtorch. Really. I couldn’t tell what he was smoking, or which way he was headed—up or down—but he was actually driving better than 80% of the folks on the road, so I’m guessing some kind of animal tranquilizer cut with raspberry ketones. It was Ross, after all. 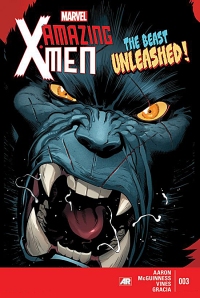 With things dreadfully serious in existing X-books such as Uncanny X-Men, All-New X-Men, and even Uncanny Avengers — which, with the Apocalypse Twins making things no fun for anyone is more of an X-book than not right now — the field was ripe for a rip-snorting, swashbuckling adventure through, well, anywhere. The realms of the afterlife? Sure, why not?

Enter Marvel’s latest X-offering, borrowing its title from one of the alternate Age of Apocalypse books (after all, it’s not like Spider-Man is using the adjective right now). From the beginning, Amazing X-Men teased the return of everyone’s favorite two-toed teleporting mutant, and with this issue, we get it, in spades.

With the latest issue, writer Jason Aaron and penciler Ed McGuinness have offered up the single-most crazy fun comic I have read since the last issue of Bad Dog. In short, Nightcrawer’s dad, the red devil Azazel, has a pirate ship and is plundering both heaven and hell for … who cares? Pirates. With cannon and swords. In Hell. If that doesn’t sound like the best idea for a comic book, I’ll eat my tricorne hat.

Especially refreshing is Aaron’s treatment of Dr. Hank McCoy, the Beast. For a character who has spent the past year moping his way through All-New, dreadfully sorry that he displaced the Original Five in time, it’s great to see him swinging from the ropes, talking shit, doing math, and kicking ass.

I’ll admit I was originally on the fence, but after this issue, I’m headed down to Blue Moon and adding Amazing X-Men to my pull list.

This is the distillation of what I’ve learned in 47 years, call ’em “life squeezin’s” for the lack of a better term. Personal application may cause serious rash and/or burning. Contents may have settled. Objects are much, much closer than they appear.

#26 Sweatpants are for sweating. Wearing them away from home for any other reason sends the signal that you’ve completely given up or are ill. Go change.

#28 Never trust a man who wears shoes with no socks, unless in the tropics, then avoid sock-wearers at all cost.

#29 If asked to leave a job, do not burn it down on the way out; all parties may become desperate enough to revisit this relationship.

#30 Do not, under any circumstances, return. This rule applies to women and bands* as well, only more so.
*Unless you’re Ozzy, but you’re not.

This blog is where you will find reviews of craft brews, literature, movies, and music—as well as declamatory screeds regarding the human condition.

For the publishing arm of Plastic Love Monkey Press, please visit plasticlovemonkeypress.com. There you will find decidedly less baseless ranting and more fine literature. If that’s your thing.

You know it is.